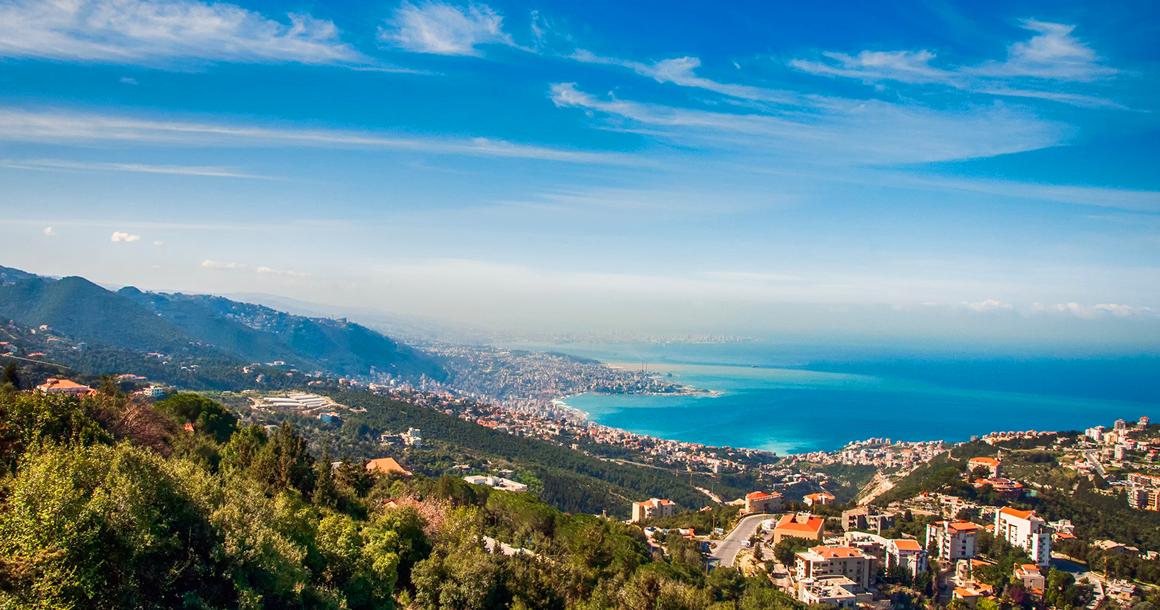 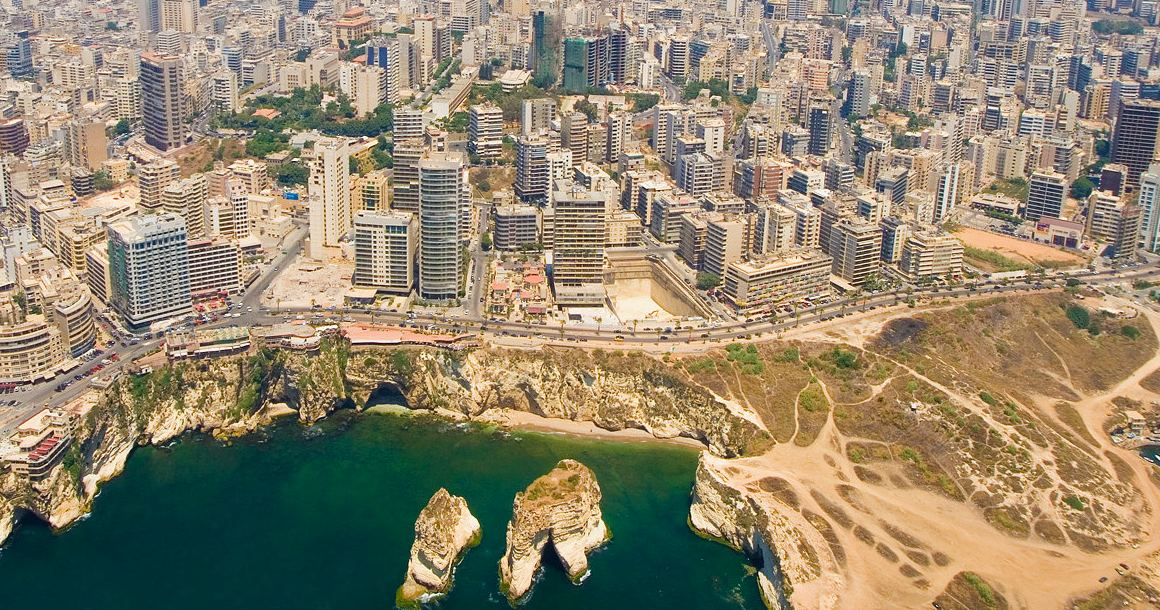 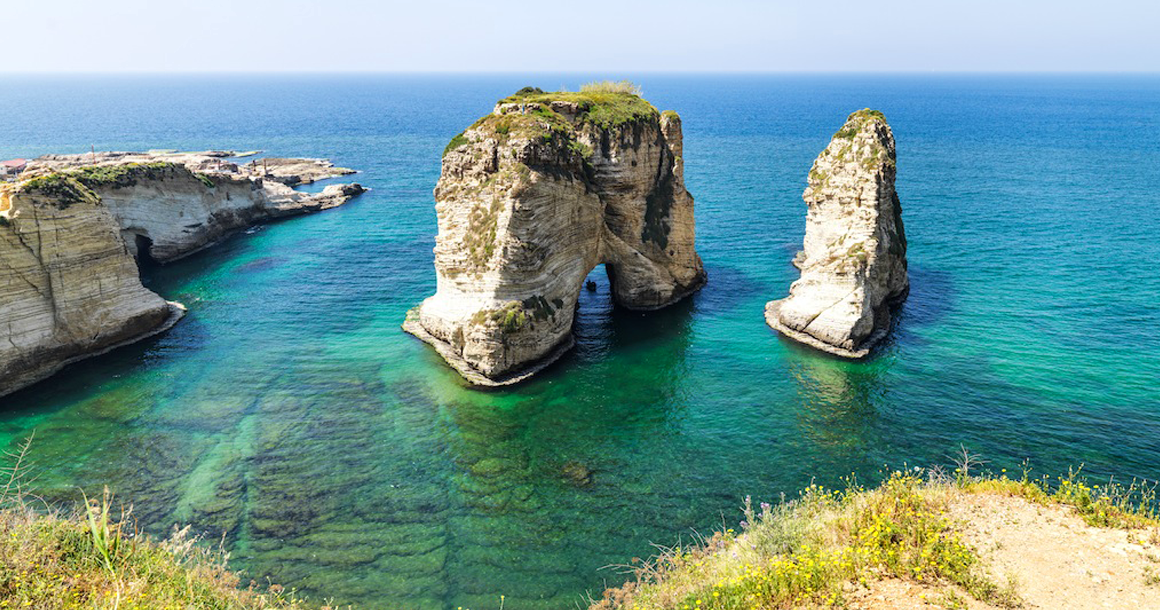 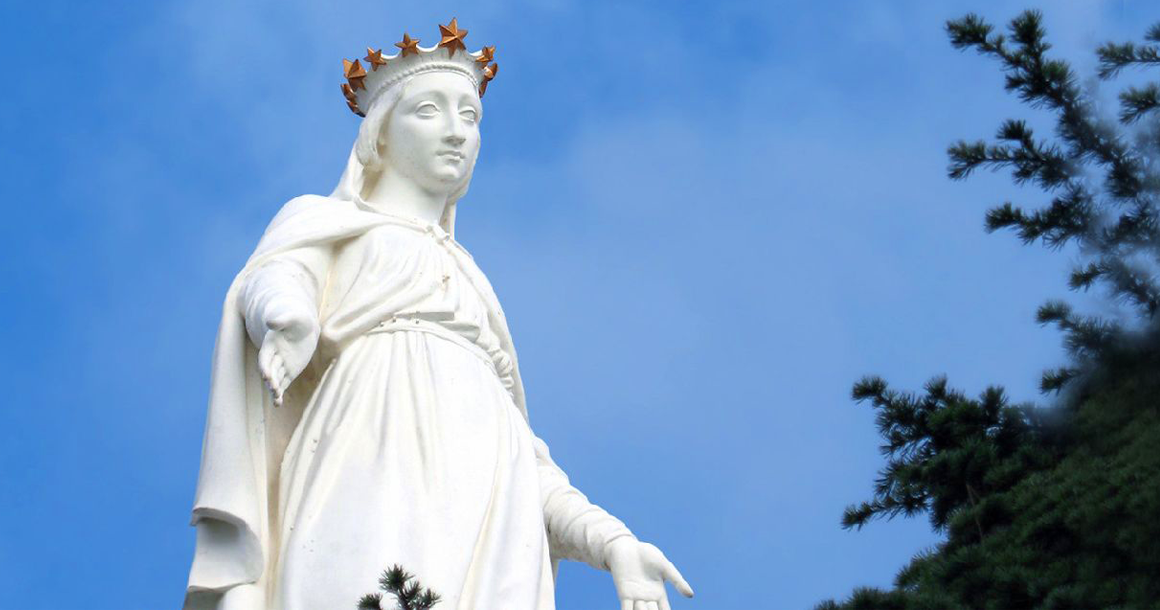 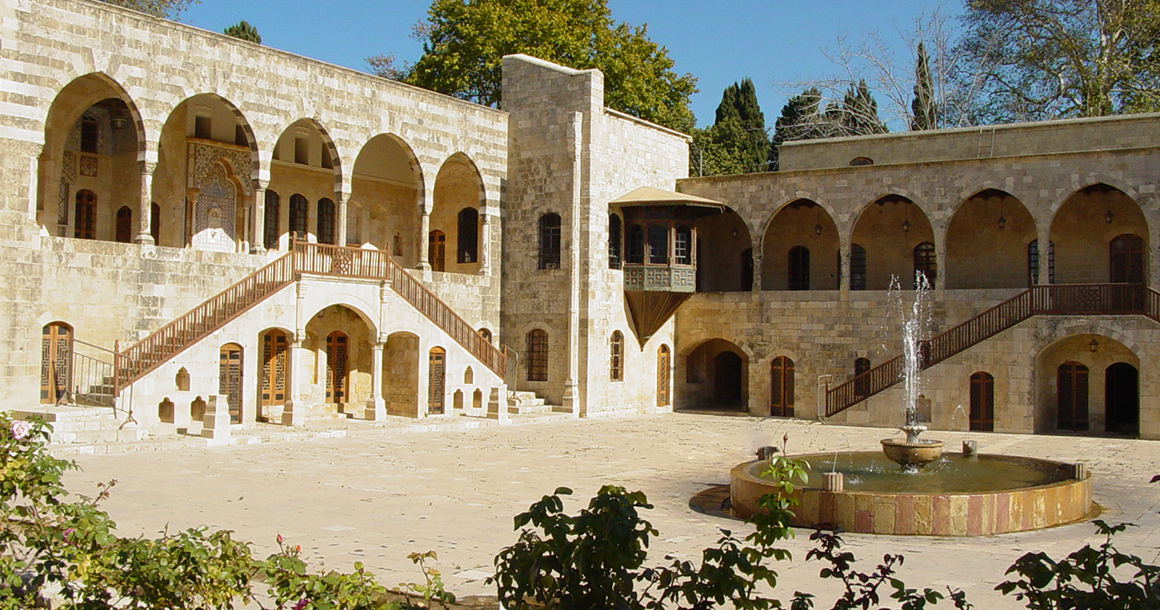 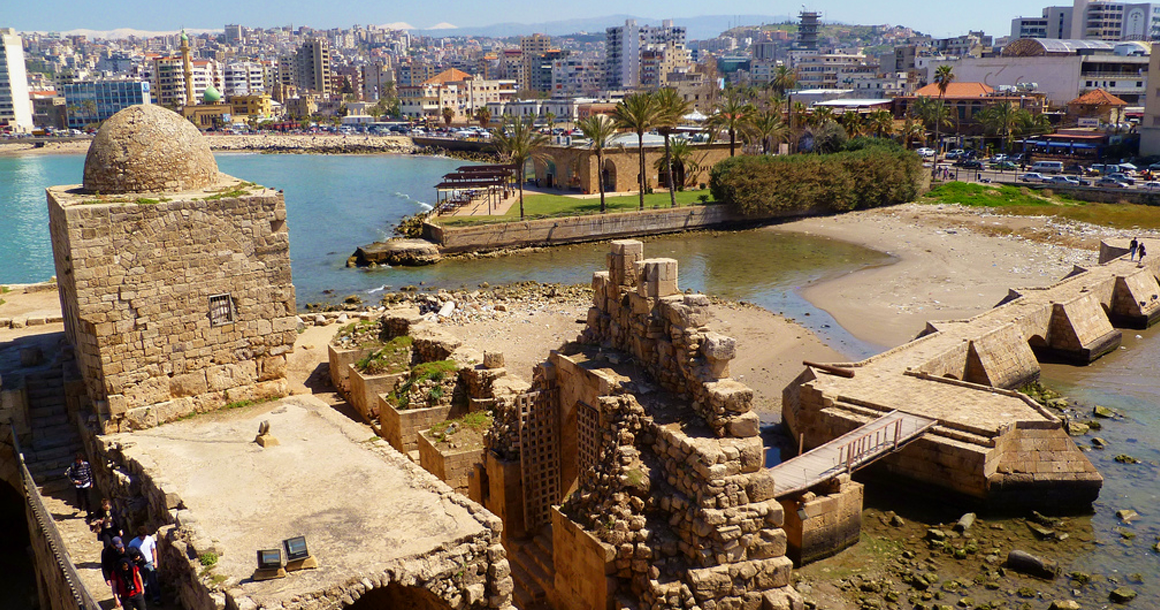 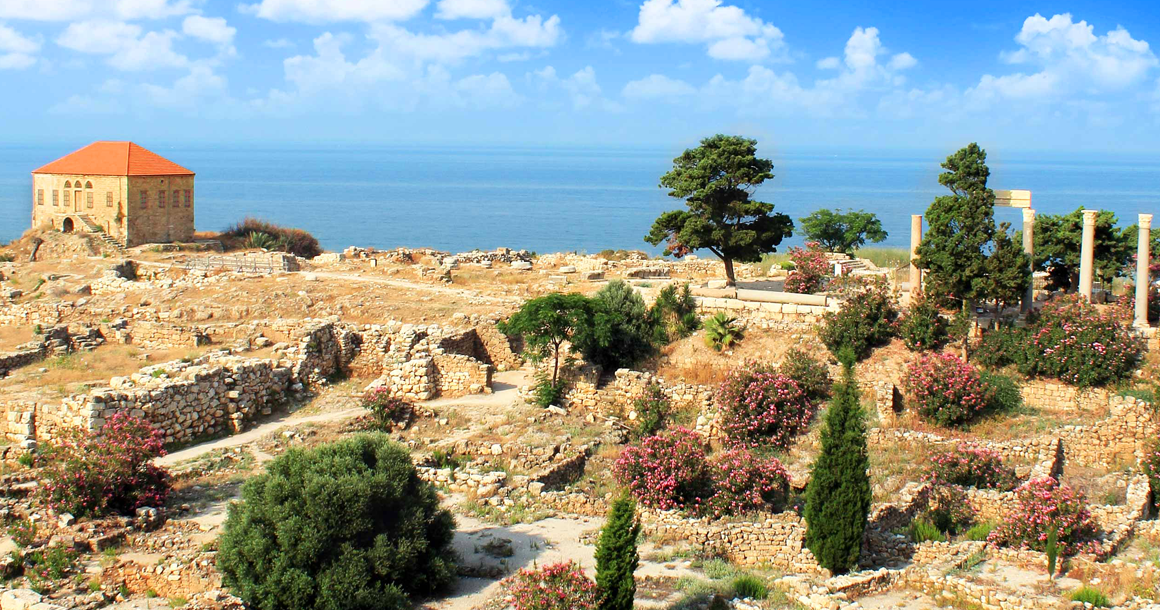 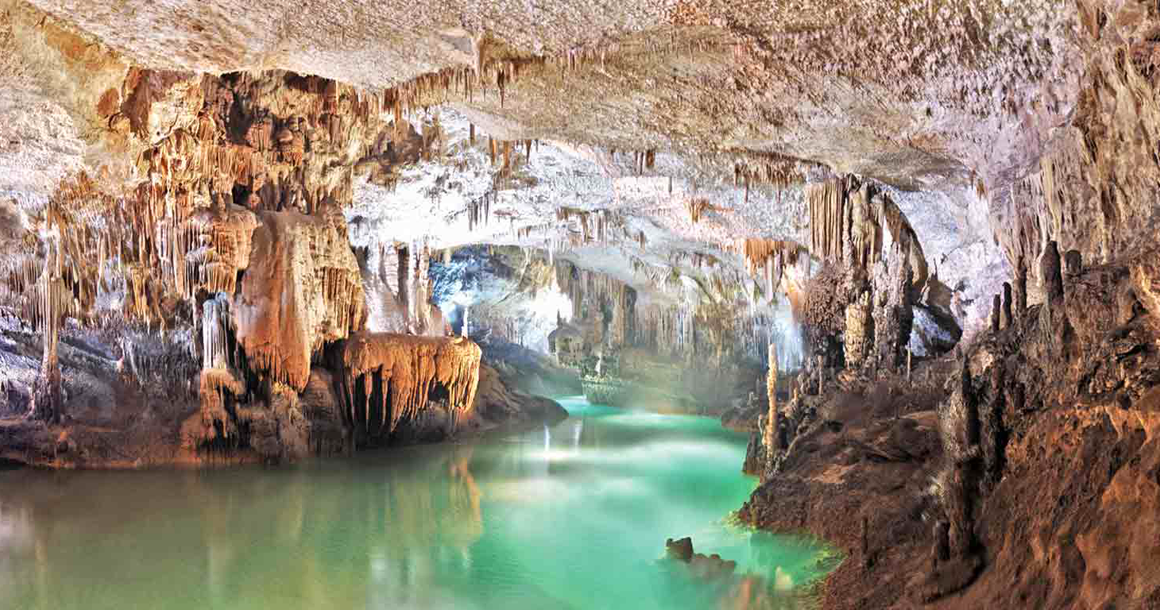 Beirut
Beirut Downtown is the core of the Beirut tourism scene. The district is a cluster of stone-façade buildings lining arcaded streets and radial alleyways. The architecture of the area is a mix of French Architecture and Venetian Gothic architecture mixed with Arabesque and Ottoman Architecture. The district contains numerous old mosques and crusader churches, as well as uncovered remnants and ruins of the Roman era. The District contains tens of restaurants, cafes and pubs, as well as a wide range of shopping stores.
Another popular tourist destination in Beirut is the Corniche Beirut, a 4.8 km (3 mi) pedestrian promenade that encircles the capital’s seafront from the Saint George Bay in the north all the way to Avenue de Paris and Avenue General de Gaulle south of the city. The corniche reaches its maximum height above sea level at Raouche, a high-rise residential neighborhood rising over a giant white limestone cliff and facing the recognizable off-shore Raouché Rocks.

Byblos
Byblos is a modern city that still retains its historical past. Byblos remains as one of Lebanon’s major tourist sites due to its rich history and scenic mountains overlooking the Mediterranean. is a Mediterranean city in the Mount Lebanon Governorate, Lebanon. It is believed to have been occupied first between 8800 and 7000 BC, and according to fragments attributed to the semi-legendary pre-Homeric Phoenician priest Sanchuniathon, it was built by Cronus as the first city in Phoenicia. It is one of the cities suggested as the oldest continuously inhabited city in the world, since 5000 BC. It is a UNESCO World Heritage Site.

Beiteddine
Is a small Lebanese town in the Chouf District, approx. 50 km southeast of Beirut and near the town of Deir el-Qamar from which it is separated by a steep valley. The town is famous for its magnificent Beiteddine Palace which hosts the Beiteddine Festival every summer.
Local Emir Bashir Shihab II who was later appointed to rule Mount Lebanon, started building the palace in 1788. It took about 30 years to complete. The best craftsmen from Damascus and Aleppo as well as Italia architects were invited and given much freedom, so its style is a cross between traditional Arab and Italian Baroque

Sidon
It is the third-largest city in Lebanon. It is located in the South of Lebanon, and 40 km south of the capital. It has been inhabited since very early in prehistory. It was one of the most important Phoenician cities, and may have been the oldest.

Tyre
It is a city in the South of Lebnanon. It is an ancient Phoenician city. Today it is the fourth largest city in Lebanon and houses one of the nation’s major ports. Tourism is a major industry. The city has a number of ancient sites, including its Roman Hippodrome which was added to UNESCO’s list of World Heritage.

Baalbeck
Is one of the finest examples of Imperial Roman architecture, and a World Heritage Site, located 85km northeast of Beirut.
(Valley of Saints & the Cedars) It is a valley that lies within the Becharre and Zgharta, a deep gorge carved by the Kadisha River. Kadisha has sheltered Christian monastic communities for many centuries. It is near the Forest of the Cedars, highly prized
building materials of the ancient world. The forest is said to contain 375 individual trees, two claimed to be over 3000 years old, ten over 1000 years, and the remainder at least centuries-old. The Lebanon Cedar is the emblem of Lebanon.